The talented 19-year-old winger from Portugal is leaving Benfica on a free transfer and appears to have already agreed terms of a January move to London.

Dju is a versatile forward capable of filling in any position upfield – on either flank or in front of goal – and will become the second Portuguese addition to the Hammers’ reserve team alongside Xande Silva.

Benfica youngster was promoted to the club’s reserve side of late after going through youth ranks with plenty of success.

Mesaque Dju has most recently been promoted to Portugal’s Under-20 side after winning the European Under-19 Championship in 2018.

Alexis Sanchez On His Way To West Ham United? 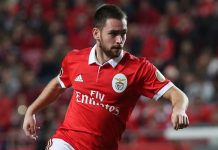 Benfica Offer Their Player €3.5m To Leave The Club

Zivkovic Could Swap Benfica For Rennes